Banks are bastards and nothing they can ever do in advertising will change that opinion.

Most advertising which is meant to make us feel better about a bank tends to have the opposite effect. The Commonwealth Bank's "Which bank is changing?" campaign two years ago springs to mind. If ever there was a campaign which made their employees look like fools, this wins it hands down.

Westpac however, have made a pretty good fist of it in their latest campaign.

In 2003, ten banks in the world signed the Equator Principles, agreeing not to fund projects that endanger the communities or the environment. Westpac was the only Australian bank to do so.

The strapline of "Every generation should live longer than the last" appears to be backed up with a wide reaching set of principles and brand assets.

I've sat in so many focus groups where the consumer talks about how they buy products which are good for the environment. It's transparent qual research talk, of course. Scan data shows products with environmentally driven propositions in the supermarket are niche products which get deleted after 12 months.

But are the times changing? Al Gore and "An Inconvenient Truth" has kick started a valid conversation about how well we seem to be treating the world like a disposable Britney Spears song.

Global warming has credibility. Brands that can help find a solution may find a larger audience.

Westpac may well have come up with a campaign which actually makes people think they're a bit less bastard-like, and that's a pretty amazing thing in the banking world. 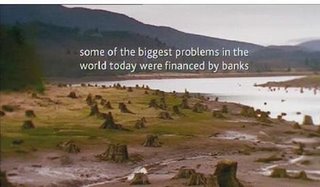 Otto was satisfied he was ready for the next Woodchopping competition in town next week after an intensive training routine
Posted by Vando at 7:17 AM