Dave Grohl is a cool bloke. He's in Sydney this week and having a beer with one of the blokes who got stuck down the Beaconsfield mine six months ago. 'Cos he promised he would.

"I'm not just having one beer with those dudes, we're going for it." he said.

I saw him interviewed on Denton and he's smart, funny and good a pretty good perspective on life. I wish I had 10% of his coolness.

Every band you see is a brand. It's more than just the music, it's the people behind it.

I've never been a big fan of the American rock music scene. Nickelback, Red Hot Chilli Peppers, Foo Fighters etc. It was only when I started realising Dave Grohl was a top bloke that I opened myself up to liking the Foo Fighters, and now it's on high rotation (especially on the iPod during a gym session). He gave me the reason to like the Foo Fighters brand.

Bernard Fanning is the same. I'd love to have a beer with him. Never really got into his band Powderfinger, although I'll probably give them a good listen next time.

That's why a good PR strategy for a brand reaps its rewards. Some of the stuff you do is hard or impossible to measure. But if you can show prospective customers that there's a human face behind your brand, and it's someone you wouldn't mind having a coffee or a beer with because you think you'd like them, that can only be a good thing. Whether it's the Foo Fighters or Vegemite or Panasonic or Westpac. 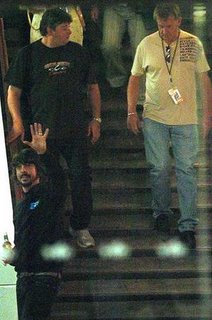 Dave Grohl with a traveller and one of the miners.