One man walks into a bar and talks to 5 women. He gets rejected by them all and walks home in the doldrums.

Another man walks into a bar and talks to 5 women and gets rejected by all of them. He looks at this as a positive outcome and approaches the sixth girl with confidence. He knows that with every girl he approaches the likelihood of success increases with each introduction.

If he's successful 9 out of 10 times on average, then every knockback is one step closer to success.

So what is the measure of success?

I've found that this is a critical question which has major implications on the brand strategy. For instance, some companies regard new product launches which only last a year in the trade to be raging failures. The direct competitor might define these as a success.

I've worked in an FMCG company where the lead times for new innovations were really long. Conversely, their competitor was swift and had the ability to introduce new lines quickly. Not all of them worked and they were deleted in a year, but they always had a new product to take it's place. And some of them were stayers.

As a result, the competitor commanded critical shelf space with the trade. They had new news to talk to their consumer about. They created power brands within segments and the new innovations were strong fits with the brand proposition, so they helped drive total brand equity. And overall, they were showing massive growth whilst the company I worked for was in concerning decline.

A lot of it was to do with the nature of that particular category, where consumers had proven over time that they were very willing to try new things. New products on the shelf were welcomed and accepted.

Interestingly, the company I worked in defined the one year launches by the competitor as being failures. Given the dynamics of the market, I argued that they were in fact incredibly successful. The business results were the ultimate proof.

This measure of success had critical consequences on the entire performance of the business.

I traced the problem back to the action standards applied by the Market Research Dept. They had one action standard (eg one top box number) in place for all products across all categories across the entire company. If the result missed by 1 (out of 100), it wasn't launched.

Each new launch was treated the same, whether it was the launch of a major new brand, or a line extension which kids would love but be tired of in 12 months time. The action standards were in no way tied to the optimal strategy for a particular market.

The solution? Brand and category strategy needs to be determined and agreed up front. When this is agreed, only then should the right research action standards be put in place. Not the other way around.

Not every new launch is going to be the new U2 or Madonna. Whilst that's what we should strive for, we live in a disposable and fast changing world, and there's often benefit in balancing these up with an Arctic Monkeys or Franz Ferdinand (only 'cos I think these guys will never have another hit). 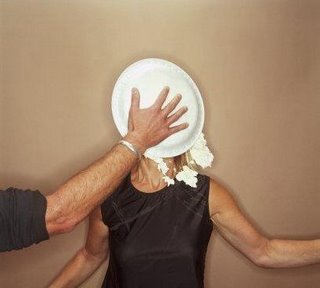 Bert had had enough of women's rejection in bars and decided to hit back
Posted by Vando at 9:06 AM