With some talk in blog posts recently about winning strategies for pitches, an Australian company has come up with a secret weapon which will help agencies downunder.

The new Patriot wonderjock is the male equivalent of the Wonderbra, which super-sizes blokes packages. "It basically lifts, separates and extends," said founder Sean Ashby.

The new wonderjock is heralded as a breakthough for agencies during the pitch process. As one agency exec explained, "It helps show the client we're bigger and better in all departments".

Another remarked, "The client wants to know we'd be really excited about working on their account, and that we're not afraid to tackle the meaty issues."

Not all ad folk are convinced though. One leading Creative Director remarked, "We're an integrated through the line agency and I see the wonderjock as purely being a below the line activity".

And a report suggests that one agency is rubbing up staff the wrong way by demanding that all personnel working on the pitch process, men AND women, wear the wonderjock. 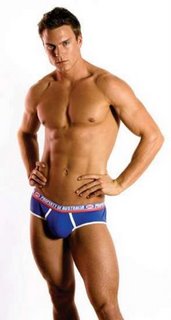 Derek could finally start wearing his socks on his feet
Posted by Vando at 8:14 AM

Vando ... as I said today, I reckon that Borat has GOT to be the PERFECT brand ambassador!

Gavin, I think they are looking at Borat for their next line extension.....