OK, now that I have made myself appear all smart and stuff by talking about transmedia planning in my last post, I reckon it's worthwhile delving into the practicalities of all this.

In my (mostly) FMCG client side experience, I think that agencies are struggling to come up with the stock standard cohesive 360 degree/media neutral campaigns based around one idea.

I'm talking the big agencies here, not the assorted hot shops in town.

This is what usually happens....

The planner focuses on getting words right on the brief, and not much more. I'm wondering when all this interesting thinking I've been seeing over the net in the last couple of months is going to filter through to specific actions by big agency planners.

At the creative meeting a 30 second ad gets presented (with perhaps a bonus print ad). The TVC is usually the biggest spend item in the budget, so the agency is (understandably) reluctant to do the whole 360 degree planning outlook until the client signs off on that creative idea. And how often does that happen after showing the first ad?

Then when the TV is finally signed off, the comms idea gets half heartedly presented across some further channels. Some of it is good, some isn't. But it's not some integrated approach. It's ultimately force fitted around the TV ad.

I don't know whether they're harder for FMCG brands to achieve, whether agencies are giving the client what they want to see, whether it's a lack of understanding on the clients behalf about the potential of this new comms world outside a 30 second TVC. I suspect it's often a combination.

This isn't being cynical. It just generally happens this way. And some of the campaigns have been quite successful, I should add.

All based on my experience, and I'm sure there are plenty of other examples to suggest otherwise, but ultimately, I'd be happy if agencies could crack the common 360 degree comms model before they start talking about stuff like Transmedia planning.

Unless of course it's all one and the same thing. 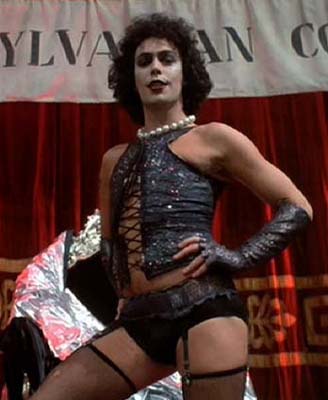 Transmedia Planning is already being labeled as old news in the wake of the newest advertising model - Transvestite Planning.
Posted by Vando at 8:27 AM