The Blunt Side of the Media Knife

A knife has a sharp edge and a blunt edge.

A knife with two blunt edges is useless.

A knife with two sharp edges is a bit silly and just plain dangerous. Unless you're in an Andy McNabb novel.

A communication strategy for a brand should always weigh up whether it needs to follow the common sense principle of the knife. That is, to offset any media/creative blunt edge with a sharp edge. And vice versa.

I've been looking at this Industrie campaign for about 12 months now and am still trying to work out where the sharp edge is.

The clothes themselves are great, and the retail outlet on Oxford St still exudes the edge that it's competition has. But when the brand started being advertised, sudddenly the jigsaw pieces didn't fit.

I have a wardrobe full of Industrie stuff. I like the style and I like the brand. But now every time I see it beaming at me from the backside of a bus, all is says to me is that it's a conservative, mainstream fashion label with no imagination. What is Industrie trying to say here?

Just because they've now got distribution with the mainstream retailers (Myer and David Jones), it doesn't necessarily mean they need to start treating themselves as a mainstream brand. Jessica Rowe tried this, and looked what happened to her. 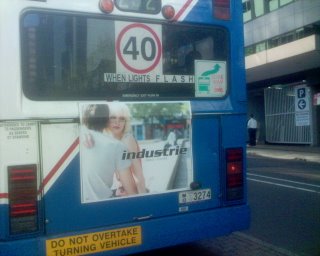 If Industrie is starting to look a bit daggy to a mid 30's bloke, how cool is it looking to the mid 20's set to whom the brand is aimed?

This ad is actually an improvement on the last set of ads, which just a bloke standing there with a shirt on. At least he gets the girl in this one.

Are bus backsides the right environment for a fashion label like Industrie? I can understand an ad for Nacho Libre and The Boy From Oz. As separate films I mean. Not together, although that would make an interesting movie.

Fashion brands are the ultimate in badge value and aspiration. What's the aspirational part of a brand covered in pollution, running 24 minutes late and packed with schoolkids? 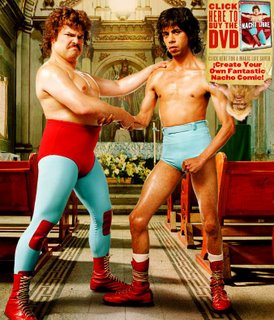 What I would expect to see on the back of a bus. Perhaps.


The opportunity for the brand is to at least balance up the dull edge of the bus campaign with things like avant cards, some buzzy street press advertising or Moonlight Cinema sponsorship. They may well be doing this anyway....I have only seen the bus campaign in the last 12 months.

Crikey, even a boring old brand like LG is using the sharp edge of their media knife with an ad in the latest Talk mini-mag.... 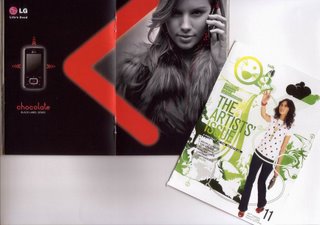 Or have I got it all wrong and Industrie is in fact aimed at mid-30's guys desperately trying to stay young? In which case they're doing a pretty good job.

If not, Industrie might be better off not even advertising their brand until they get it right because it might well be doing more harm than good.
Posted by Vando at 3:53 PM