Smart FMCG companies are starting to change the way they advertise in a fragmented media environment.

Unlike 5 or 10 years ago, a mass advertising approach against a broad target like mums 25-49 is much more of a hit and miss affair these days.

You just end up with the same old spots in the same old shows. Plus four spots each in New Idea and Woman's Day. Then some metrolites if you can afford it. All very efficient on paper no doubt.

Up & Go Energize is a line extension which is "High Performance, packed with 20 grams of protein for muscle development".

You'd think this would be as niche as it would get. Not so. Our Seventh Day Adventist friends over at Sanitarium have received some nice advice from above and compiled a clever campaign targeting several groups of potential new users.

The TV ad targets the Bloke In The Office. More energy through the day. Helps you pick up chicks too apparently... 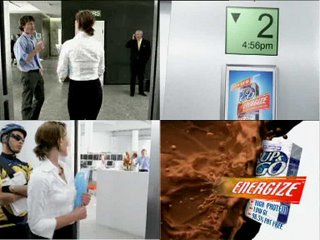 Then there's the Teen Dudes. Bring in motorcross star Chad Reed as spokesperson, link it with extreme sports, and create an interactive web site.

OK, the TV ad is as boring as hell, but when you put Motorcross and Seven Day Adventists together, it's going to take some time for them to jump into bed and have multiple orgasms.... 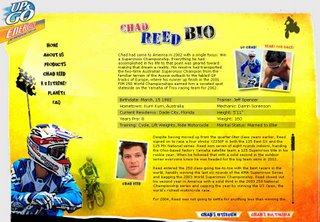 Then there's the Gym Junkies. Plastered up at Fitness First centres is a really simple, clear ad.

Just a big pack shot with the words, "Leaving so soon?"

Doesn't matter if you're if you're a girl or a guy...this will help get you through your workout. I've seen plenty of people drinking them as they're walking into the gym.

Fitness First yuppies don't know who Chad Reed is, no-one sees him and no-one cares. But he's probably selling a lot of Up&Go Energize for Sanitarium.

And these little suckers sell at a premium to the regular Up&Go variants. Probably more profitable and incremental to current sales for the Sanitarium crew. They get by with a little help from their friends. 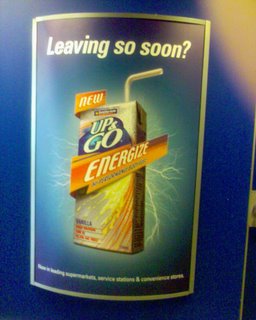