Last week I was flicking through the piled up copied of AdNews that had accumulated whilst I took my 4 month overseas adventure. It was a nice surprise to find that one of the promotions I did when I looked after Kleenex won a Gold Award at the Australian Promotional Marketing Association.

Not only that, but I reckon the actual award (Best Activity Generating Brand Volume) was one of the better ones. After all, isn't that what we do promotions for?

The concept was instant win. Consumers bought a pack of Kleenex, punched in their unique code, and found out instantly if they had won a holiday. And there was a Queensland holiday given away every day for four months

I must admit when the agency presented this idea to me I was really excited. When something that powerful is presented, on brief, within budget and with such a powerful idea.....I just knew it would be a winner. 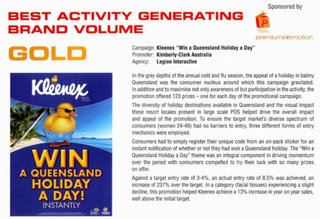 The great thing about this promotion is that we broke through a few 'truth's when it comes to marketing to women (Main Grocery Buye 25-49 in this case). We had over 1 million entries and women embraced technology in order to enter.

There were three ways to enter, and each generated a significant amount of entries, roughly...

The interesting thing here is the amount of web entries. Traditionally, FMGB's weren't thought to be on the net in their masses. The times they are a changing.

Not only did we get a huge response, but this allowed us to build up a massive online/email database which we could use to continue promoting the brand and sending out further promotional offers.

When it comes to a promotion, I reckon the key is to think big.
And secondly, embrace technology as part of the mechanics and/or concept, no matter who the target audience is.
Posted by Vando at 10:24 AM