As Australia continues to thump England in the Ashes, it's impressive how the Aussie players always maintain such a diplomatic stance in interviews.

They've clearly been coached well in media relations - nothing of any interest is ever said and the players somehow manage to find nice things to say about England (excluding Fletcher) straight after kicking their butts on the park. It's cliche heaven.

So it's surprising that the players agents have allowed them to feature in Ford's Tonk a Pom. The Aussies are coached so hard not to gloat in the media, and next thing there's Michael Hussey tonking a pom. Sticking the boot in.

Something about it is just wrong. 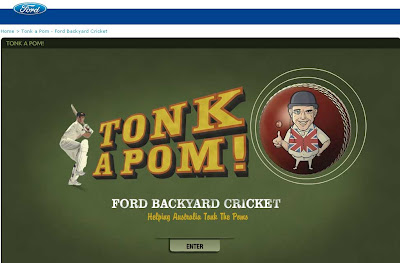 Personally I would just prefer to thump them, say all the right things, and then party like there's no tomorrow. But maybe that's just my way of winning. And from what I've seen it's the way Ponting and his players think as well.

Australians love winners. We love beating England. We love it no matter what the sport is. But when the players start gloating about how good they are it generally doesn't sit too comfortably with the Aussie public.

Perhaps Ford have researched their target market and found out that the Tonk a Pom attitude is exactly the way to act. And after seeing lots of brainless yobbo's carrying on at the cricket it wouldn't surprise me.

It's possibly the same target market as Bundaberg Rum. Years ago I went for a job as a Brand Manager on Bundy Rum. When the recruiter said I would have to spend a lot of time drinking with the target market in places like Gympie and Rockhampton, I breathed a giant sigh of relief when I didn't get the job.
Posted by Vando at 7:44 AM