Out of the Bix FMCG

There's some smart marketers at Sanitarium. They don't sponsor sports teams and big events, and spend all the big bucks that go with it.

They go for the strategy of sponsoring individual athletes rather than the team.

It looks like they individually sponsor Brett Lee and Tim Cahill. Brett Lee is a major spokesperson for the brand and does heaps of ad hoc stuff at events, online, and of course stars in quite a few TV ads.

Then on top of this, they provide the 'Official Breakfast Cereal of the Australian cricket team'.

So as a punter, it all just blends in. It looks like Weetbix and Sanitarium is an official sponsor of the Australian cricket team.

Fact is they're probably only paying a fraction of the cost versus the mob who are.

Anyway, here's a nice bit of viral from YouTube. Probably done for about $5k on a handycam.....

Not forgetting a few years ago when every sixth pack of Weetbix became Brett-bix. This is out of the bix, oops - box, thinking for FMCG. These guys are good! 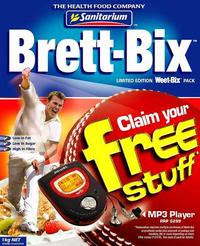 Sanitarium is toying with the idea of MontyBix for the English market
Posted by Vando at 8:44 PM