What would be the most boring FMCG marketing job in town?

Here's one guess.....Brand Manager for either Duracell or Eveready.

There's only one thing you can do with a a battery to have a point of difference. Make it last longer. But you don't want to make it last too long or you'll drop volume.

So you just keep bashing out the same old comparative spot year after year after year. Senior management says it has to be done that way 'cos the research says consumers take in and believe the message. I suppose they probably do when you shove it in their face in qual groups and ask 'em 20 questions.

All I know is that when I see one, I just switch off. I just see another bunny, or action man, or whatever, and know I'm gonna hear the same old story.

"We last longer than Durcaell". "We last twice as long as Eveready". blah blah blah.......

After decades of seeing these ads, I still don't have the faintest which lasts longer.

The overall perception I'm getting is that they're both about as good as each other. It would be like getting propositioned on the same night by both Kylie Minogue and Scarlett Johansson. Either would be fine thanks.

Surely there's an opportunity for one of these brands to start connecting with the consumer in a different way? Maybe one that will make me feel a lot more positively about it when I'm at the shelf making the choice.

Jason Recliner trivia fact - I went to the same primary school as Kylie. I wonder if she remembers me? 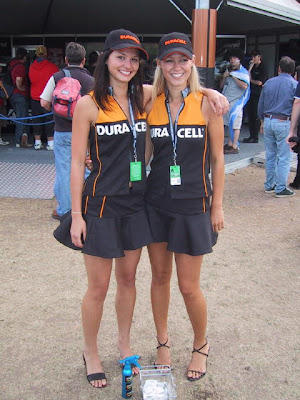 Research clearly shows men would rather see another TVC with the bunny than these girls.
Posted by Vando at 7:42 PM