I've discovered another brand which has reverted to, and I'd like to apply my own Trendwatching term here....Yobbo-ism.

Yobbo-ism is the marketing act of taking a premium brand in the marketplace and tailoring it to yobbo's.

First it was Galliano. Now Lion Nathan have adopted it.

Tooheys Extra Dry has always been a more premium beer and reasonably cool. Not Asahi uber-cool, but cool enough to distinguish it from the good old staple Tooheys New.

Now they've launched Tooheys Extra Dry Platinum. It has more alcohol in it (6.5% vs 5%). But instead of making the brand cooler, it seems the message is that it just makes you drunker and more yobbo-like.

Flicking through a street press mag I came across this double page spread.... 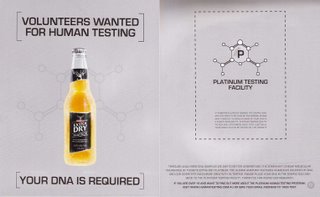 Attached to it was a plastic bag. It asks you to send in a bodily sample for DNA testing (at your own expense).... 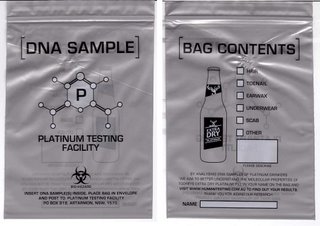 Then you go to this rather boring site and wander around aimlessly with no sign of a brand whatseover. I know it's not meant to clunk you over the head, but at some point you want to get some brand exposure for the investment.

It all just seems like too good a brand to apply Yobbo-ism to.

Who knows - the positioning might be spot on. Lion Nathan have a bunch of serious european premium beers which they probably don't want to overlap with.

And there's probably a market for down-to-earth working types who are looking to trade up on image from VB and New but see Heineken as a wanker's beer.

But is the comms idea a good one when it's based around sending a scab through the mail? The first impression you get of the brand is pretty banal.

And it makes less sense when the last ad we all saw (and loved) for Tooheys Extra Dry was this.....

G'day! There's a lot of almost totally hidden advergaming content on the site in the Test Area (seriously- every single one of those test tubes has a beautifully realised game). It's a strange combination of Yobbo-ism meeting Too Cool- why would you need to tell anyone what's going on- or give them a reason to spend time with you. Looks lush though...

Hi there, it's my firt time visit to your blog. I am trying to read them all. your ideas are fresh and great. I really like them. I just started my own blog couple months ago...i hope it will be better (kindly visit mine if u have time)