300,000 people turned out in Perth to watch madmen fly around in their magnificant flying machines on the weekend. Not bad, for a city of 1 million people.

And not bad either for Red Bull, who are the naming rights sponsor of the event. They pretty much own it all....The Red Bull Air Race. There's some awesome footage on this site as these blokes fly through giant party hats at breakneck speed.

This is a top example of how a brand which has values of excitement, energy, bravery, risk taking and possibly a good dose of mindless party-type loonyness has found an event to match.

Whilst so much sponsorship money falls through the cracks in an over cluttered environment, Red Bull has pulled off a winner here.

It will be interesting to see what kind of impact there is on the brand after someone gets killed. Somehow I don't think it won't make too much difference.

Great news in Perth though. The only casualty was a kid who got kicked in the head by a police horse. 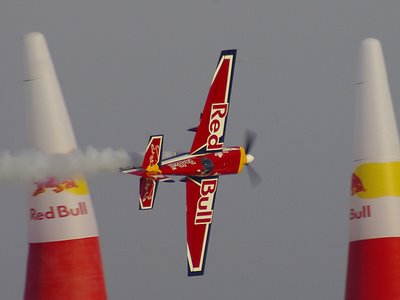 Joe was flummoxed when he came into land and was confronted by not one, but two giant Mr Squiggles.
Posted by Vando at 10:45 PM