Archie Thompson and the Lada

About 20 years ago they tried to launch the Lada in Australia.

Russia's answer to the Ford Laser was launched onto the market for about $12,000. They sold a few of them. But then they stopped selling them. It seemed the hot Australian summers were melting parts of the Lada that were designed more for Siberia than Townsville.

But the Lada was always a brand destined for failure. It will never work in this country.

Sometimes when you launch a new product, it just dies in the arse. Then you launch the same product 5 years later and it bombs as well. Every 5 years, you relaunch it. Each time, there's something different. Maybe a new management team, new paint, some new features. But fundamentally it's still the offering underneath. And people see it as a dog no matter what.

Then one day, the product is launched again. And it goes mental! Everyone wants to get on board and own it.

That's football in Australia today. After years of Lada launches (and accompanying dodgy Lada quality), football is now the iPod of sport in Australia. And I am absolutely loving it!

How bloody good was it to see 50,000 football fans in Melbourne watch the Victory thump Adelaide yesterday? 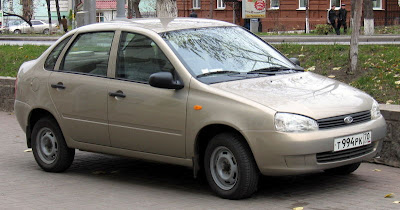 
I'm a Sydney FC fan but really, it would have been an injustice to the league if Sydney had somehow bumbled their way into the Grant Final and tried to score by hoofing it over the midfield and into the slowest forward line in the comp.

The finals series had some fantastic football throughout. Really great football.

Years ago I got Foxtel and used to watch all the English Premier League games until the wee hours. Or tape them and watch them on sunday morning. Nowdays I have no interest in Arsenal vs Reading, or Tottenham vs Charlton Athletic. I would rather watch Newcastle vs Adelaide. Two years ago they would have locked me up for saying that.

I'm just going to reminisce for a second about the time that this brand was relaunched. When John Aloisi knocked in the deciding penalty against Uruguay last year, he started the rebirth of football in this country.

Unfortunately I missed the Australian World Cup frenzy in this country. Fortunately I was in Germany at all the first round Aussie games! Here's some photo's of this glorious new powerbrand sweeping the country.....

And perhaps there is hope for the Lada yet. 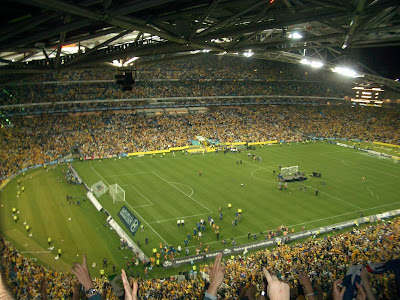 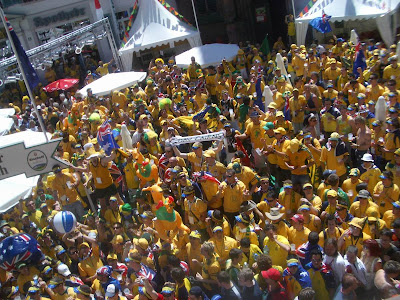 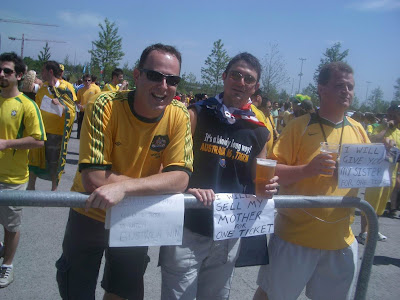 Munich. Aust vs Brazil.
"I will sell my mother for a ticket" 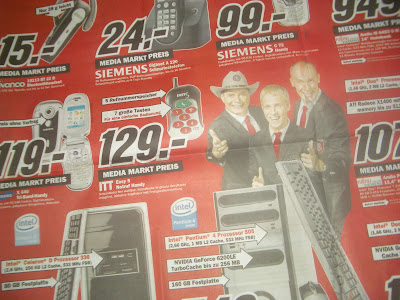 Der Guten Guys. Proving that consumers the world over will buy white goods at cheap prices from dickheads. 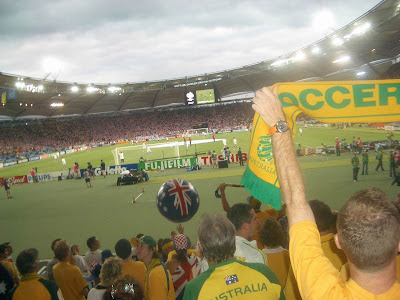 Stuttgart. Aust vs Croatia. There's a party in my pants and everyone's invited.
Posted by Vando at 9:46 PM

I was at the Victory victory on Sunday.

I grew up in Liverpool and spent many a Saturday afternoon as a teenager at Anfield.

Sunday's crowd was like revisiting my childhood. All the wit and humour of English terraces, with a few Italian style flares for added fun.

Chant of the day, since you mentioned John Aliosi, was about his brother, the red carded Adelaide captain.

Brilliant! So great to see football is finally taking off down under.

Why? I guess there are many factors, but to me a primary reason is the coming together of the ethnic groups under one tribal banner.

There was an interesting article in The Age this week, which compared the Victory to the all conquering Melbourne Knights from 10 years ago.

The difference between the teams was startling. Whereas Victory has Fred, Muscat, Thompson, Allsop and a host of ethnic names, all the Knights players were of Croatian heritage.

We only have to look back as far as last month's Australian Open to see how ethnic rivalries cause unwanted problems in sport.

A banner in the crowd on Sunday said it all: Victory - One team - One tribe.

That's brilliant Stan. I am very jealous that Melbourne can create that atmospere and Sydney is way behind, but I guess it's like a snowball effect (and the fact that Melbournites love their sport more than Sydney too).

I remember dragging my dad out to watch Heidelberg (Greek) and Preston (Macedonia) years ago, and it wasn't one for the kiddies, that's for sure.

My mate in Melbourne is a red hot Aussie Rules fan but he's been drawn into the Victory this season. His favourite player - Fred!

I was always hoping Melboune won, because I just wanted to see the team with the best supporters get up and do it, because that's gonna provide the foundation of the games growth in Melbourne from now on.

And the ultimate compliment I'm sure Stan - a comparison to the Kop!

Thank you for the great article I did enjoyed reading it, I will be sure to
bookmark your blog and definitely will come back from again.
I want to encourage that you continue your great job, have a good day