I am thrilled the A-League is up and running, and football is finally building some kind of currency in this country up against the rugby boofheads.

And I finally have a team to support in sydney - Sydney FC, who now appear to running a lot more smoothly over the last month. Not sure how much of this has to do with the fact that an ex-adman - Tim Parker - stepped aside as head honcho, has to do with it.

From what I've seen, leaders of ad agencies often aren't the best equipped people to be running businesses, but that's another story. Not that running an ad agency would be easy I reckon, but I digress.

I've been to about 10 games over the last 18 months. I watch Sydney games on TV. I'm probably what you'd call a pretty decent supporter, without being fanatical. The type of person a sponsor of Sydney FC would probably expect to have an impact on.

Anyway, Sydney FC's main sponsor is a company called Healthe. Good on 'em....they took a punt on being key sponsor of a new club in a new league.

But to be honest, I still don't know what Healthe actually do or offer. All I've seen is their logo on the shirts and some signs around the ground.

When I go to their web site, I still don't really know what they're trying to sell.

When I go to the ground, there's a whole of activation activities from a lot of brands. But not Healthe.

When I go to the Sydney FC web site, there's not even a link to the Healthe web site.

To me it looks like Healthe had the money to cover the sponsorship, but not the money to do the over and above stuff which gets the punters involved in the brand over the course of the season.

Key point: Budget not just for Sponsorship, but for proper activation of the sponsorship. 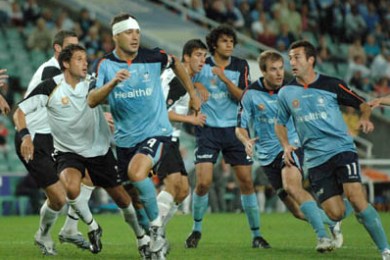 I took a look at the Healthe website. Sadly they seem to be yet another of those faceless companies who think they are brands because they have an odd name and a corporate typeface.

I think the A League will really benefit from the appointment of Ben buckley to the top job at the Football Federation. The AFL have done a brilliant job taking Aussie Rules national, getting a massive TV rights deal etc. Buckley was a key player in this.

The AFL has left the NRL way behind. With a bit of effort and smart thinking the A League will do the same.

As for Sydney, they will lose 3-1 in Melbourne next week to a record A League crowd of around 40,000.

That'll be a cracking game I reckon Stan.

I'm loving the fact that Melbourne are getting huge crowds. They're a great team to watch...something that no-one has really talked about in relation to to Sydney FC and it's fading crowds. Teams like Roar and Melbourne are much more entertaining to watch.

Agree on the Ben Buckley thing too. A good move. And as long as Lowy is involved, we won't have a better window of opportunity to make football work as we have now.

My prediction: 2-2, with Muscat and Butcher in a punch up.

Sounds like the old 'Oriant' logos on the Perth Wildcats uniforms last season. A company paying for sponsorship with no substance behind it.