What if a company said to it's agency that it wants to make lots of ads?

Perhaps in the past, the company has worked on making one ad a year which cost $400k on production and $100k on pre-testing. That's $500k spent before the ad's gone on air, and it better damn work otherwise they'll never get their bonus.

Now the company says it wants ads which cost $50k to make. Lots of them. And test market them. And over time build up a bank of ads which work which can be run all around the country.

Let's say you made an a TV for $50k. You ran 600 TARPS in Adelaide over 4 weeks. This might cost another $50k or so. You measured scan data (2-3 week lag), and did some on-line brand tracking research (costs you would incur anyway).

Within 8 weeks you'll know pretty quickly what the ad did for your brand and it's sales. All for about the same cost as a Link test.

You might do something similar in Perth. And Brisbane.

Over time, you'll have a nice bank of ads, backed up with a robust understanding of how each of them works.

The contentious issue of ad testing is replaced with actual in market testing. The key challenge is the agency needs to come to the party and deliver strong creative on small budgets, and on a regular basis.

The upside is that they can sell more creative ideas more readily, because the risk suddenly becomes a lot less.

This approach won't work for all products, but it might work for some, especially those where the product offering doesn't change over time. Insurance firms, soft drinks, wine etc. 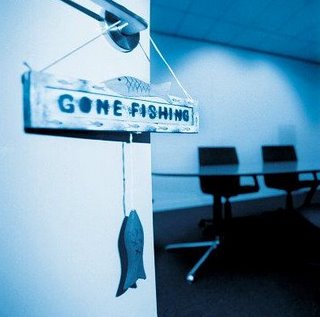 The creative teams were thrilled at the new "make an ad for $50k" policy
Posted by Vando at 2:34 PM