I've not seen many simpler, more powerful ways to visually demonstrate a problem/solution scenario as Claratyne has done in their recent campaign.

For sufferers of hay fever and allergy, this little cloud says it all about how you feel at the time. Fantastic stuff.

Just one improvement though....

There's a 30 second TVC which has about 7 cloudy head scenarios. I reckon you only need to see it twice and you get it. By the end of the ad I'd got it so much I was bored and almost lost interest in who the brand was. This idea is so powerful, 15's would have worked all the way.

The other ideas coming into my head would be to have people walking around the city streets at peak hour with these clouds around their head. Maybe wearing a t-shirt which says "Need Claratyne?"

There's also a nice outdoor waiting to be done. Week one has the billboard totally covered in the cloud, extending outside the boundaries of the signage. In Week 2 the cloud's cleared away and Claratyne the brand is revealed.

Geez, it's easy being a creative hey! 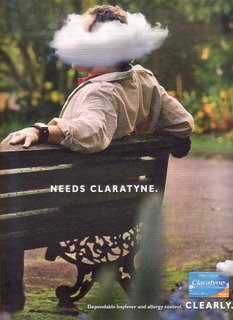 Global warming is playing havoc with the weather and low cloud movement over Sydney
Posted by Vando at 10:10 AM