Flew into London from Mexico City. England is getting very excited, and why not. The World Cup is only 4 days away and the pubs will be packed.

Mars have rebranded their Mars Bars for a limited time. They are now called Believe bars. Obviously they came up with this strategy before Wayne Rooney got injured and was replaced by Peter Crouch.

Either way, it's a clever strategy. How many times have marketers talked about going for the emotional pull, only to get scared and end up in a steaming pile of functional claims and a Brand Power ad.

And Mars aren't actually saying England are going to win it. They're just asking to believe that they can. Kind of like the ALP.

Mars are also rolling out the same campaign in other countries by renaming the Mars Bar.....

Brazil - Ours
Togo - Fluke
Switzerland - We support all names
Costa Rica - Buckleys
Australia - Who Gives a Shit, We're There!

I actually bought a Mars/Believe bar yesterday and the only thing I really believe is that the size of them is going to get even smaller. 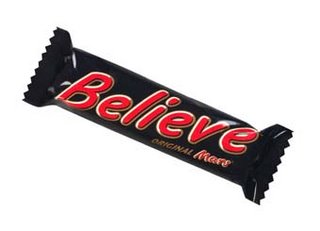