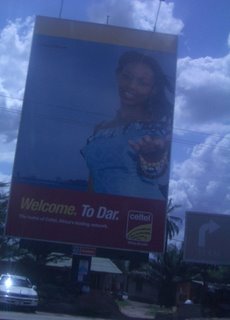 Leaving Kisii we travelled about 90 minutes to the tanzanian border. I survived the cavity search and passed safely into the 9th and final country on my world tour - USA, Mexico, Belize, Guatemala, England, Germany, Greece and Kenya.

With all the poverty evident everywhere we go, there is one glaring contradiction. The mobile phone companies - Celtel and Safari - are everywhere. No matter how run down a village is, there always seems to be a significant number of Celtel and Safari outlets. And most people seem to have a mobile phone, even if their house is made of sticks and mud and has no roof.

The companies hold up their end of the bargain as well. There's no problem getting a mobile phone reception in the middle of the Serengeti. Compare this to Australia, where Telstra find it difficult to maintain a connection from North Sydney to Lane Cove.

A South African guy we met at Paje told us that the mobile phone companies had forecast sales of 200,000 phone sales when they were introduced not too long ago. 20 million phones later and it's a foreasting issue I'm sure they're not complaining about.

We set up camp in the middle of the Serengeti and watched for lions as we ate. 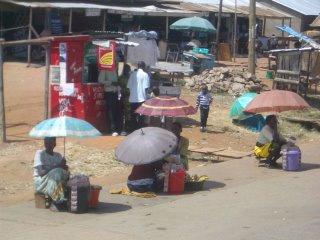 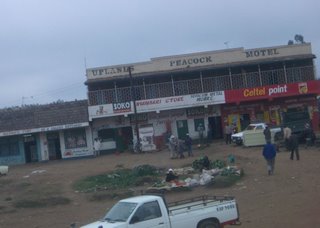 Celtel - crap buildings, great reception
Posted by Vando at 10:24 AM